Everything You Need to Know About TalkTalk Broadband Deals and Bundles

TalkTalk is one of the UK’s best-known broadband providers. It’s expanded enough to rival providers like BT, Virgin Media, and Sky – but with far cheaper deals than its major competitors. The primary goal of TalkTalk broadband is to deliver good value, fast broadband to customers across the UK at competitive rates.

This being said, it’s worth noting the variety of factors that go into a TalkTalk broadband deal besides the cost per month. It’s also worth considering the speeds of TalkTalk broadband, in addition to its availability, reputation, and the quality of its customer service.
Last updated in: August 2022

It’s easy to get lost when trying to work out if a provider is right for you. Luckily, in this guide we’ll help you understand everything TalkTalk broadband has to offer. You’ll find what is good about TalkTalk as a provider, what’s not so good, and best and cheapest TalkTalk broadband deals on the market. 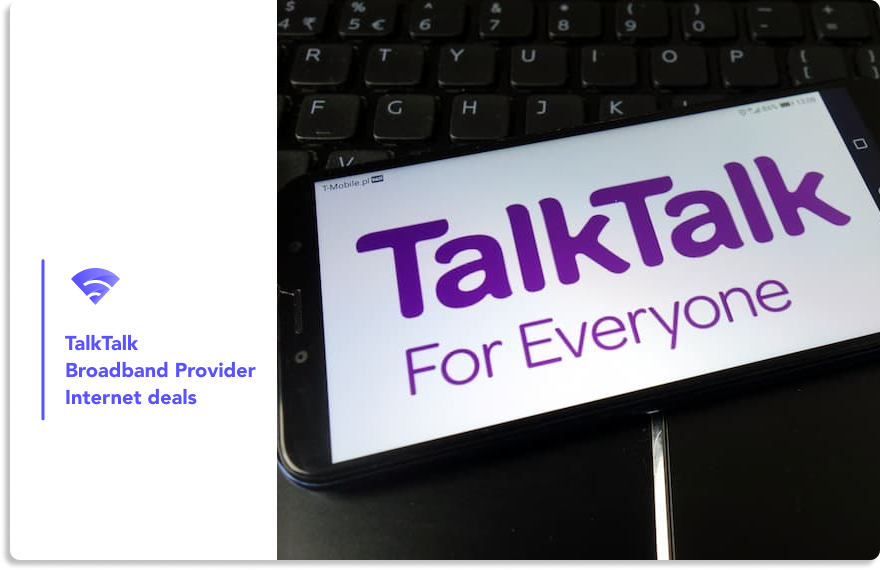 What does TalkTalk broadband offer?

TalkTalk positions itself as a provider which offers great value which is true for its prices which support this. The low prices are backed up by great broadband speeds that can easily rival the other major providers.

In addition to this, TalkTalk also allows you to bundle TalkTalk TV with your package. This will allow you access to ample entertainment with the likes of NOW TV and BT Sport. TalkTalk also promises no mid-contract price rises (apart from inflation-related ones) meaning that you’ll pay the advertised cost. The provider also promises customer satisfaction with their 30-day Great Connection Guarantee, which allows customers to disconnect for free during the first month if their fibre broadband isn’t acceptable.

What is TalkTalk’s broadband coverage like in the UK?

TalkTalk’s superfast broadband is available across the majority of the UK, mainly because it uses the UK-wide Openreach network. However, its full fibre connections aren’t yet available everywhere.

You can use TalkTalk’s postcode checker to see what TalkTalk broadband is available in your area.

Is TalkTalk broadband available in my area?

If you’re looking for high-speed, full fibre broadband, keep in mind that TalkTalk’s ultrafast and gigafast networks aren’t available everywhere yet. You can check the availability of all TalkTalk broadband packages online with the provider’s postcode checker.

What broadband speeds does TalkTalk have?

When you’re choosing a broadband deal, one of the most important factors to consider is your Internet speed. Smaller households with basic Internet needs, such as web-surfing or sending emails, may suffice with lower broadband speeds. However, if HD streaming or online gaming is commonplace in your home, TalkTalk’s faster packages will meet your needs.

Here are the average broadband speeds you can expect from each TalkTalk package:

*Note that TalkTalk’s full fibre packages, which offer download speeds between 145-900Mbps, aren’t yet widely available. This is because TalkTalk is still in the process of expanding its full fibre network across the UK.

The pros and cons of TalkTalk Broadband

Before committing to a contract, you should consider every aspect of TalkTalk’s broadband packages. This includes the positives and the negatives – so make sure you’re aware of these factors so you can make an informed decision:

You’ll find a wide range of broadband deals with TalkTalk. Whether you’re looking for a basic Wi-Fi connection or the fastest deal with included TV services, you’ll find good value with TalkTalk.

Here are TalkTalk’s most popular broadband deals, including those with phone lines:

As broadband and landline connections usually rely on the same cables, you’ll find that most broadband deals include a home phone. However, in the era of smartphones, not all customers want landline services. Thankfully, TalkTalk is aware of this, which is why it offers some broadband-only deals too.

We compare the market to find you the best broadband deal

Here are a range of TalkTalk’s fibre broadband deals.

TalkTalk operates as primarily a fibre broadband provider, but it also delivers ADSL connections. It only offers one non-fibre deal, which comes with rather slow Internet speeds. However, it will suffice for smaller households of one or two people – especially if you’re not downloading films in HD or attending video conferences often.

TalkTalk offers a diverse selection of broadband packages which include either TV, landline phones, or both! These combined packages all come with extra services besides broadband, offering customers better value for money.

TalkTalk delivers TV services as well as Wi-Fi connections. These services are presented under the brand of TalkTalk TV – which includes access to YouView, NOW TV, and Netflix. TalkTalk TV deals include a set-top box, which allows you to access select live channels and streaming platforms.

Here are some of the most popular TalkTalk broadband and TV deals currently available:

If you’d like to receive a landline phone service from TalkTalk, you can add it onto your broadband plan. You’ll find that it’s much cheaper and more convenient to receive broadband and phone services from just one provider, rather than two.

These are the best TalkTalk broadband and phone deals currently available:

Customer service is an important aspect of any broadband provider, as you’ll rely on your supplier’s support team if your Wi-Fi connection fails.

If you’d like to speak to an expert at TalkTalk, you can use their online web chat which is available seven days a week. Additionally, you can speak to TalkTalk’s customer service team on the telephone from 9am to 7pm on any day of the week – including weekends.

You can contact the TalkTalk customer service team using the online web chat service , which is open seven days a week. It’s run by TalkTalk experts – rather than a chatbot.

However, many broadband customers are keen to speak to a real person from TalkTalk over the phone. If you’d like to reach TalkTalk’s customer service team this way, simply call 0345 172 0088. Their phone lines are open 9am to 7pm every day, including weekends.

TalkTalk has accumulated 66,934 reviews on Trustpilot, with an average score of 2.7/5. This correlates to a ‘poor’ ranking – so TalkTalk’s customer service leaves a lot to be desired.

Here is an example of a five-star, highly positive review of TalkTalk’s services:

However, not all customers are so satisfied, as shown by this one-star review...

“Worst customer service. I was trying to cancel my account and was left with no one to talk to twice. Now my disconnection will be delayed even more.”

Ofcom’s 2021 report finds that 78% of customers are satisfied with TalkTalk’s service overall – but this is below the industry average of 83%.

What is the installation process like for TalkTalk Broadband?

As TalkTalk operates within the Openreach network their installation process should be relatively simple for FTTC services. An engineer may need to install an Openreach modem and a new phone socket depending on the property’s previous provider.

However, if you’re having FTTP installed, an engineer will need to complete a two-to-four hour-long process. The engineer will first connect the cabling from Openreach in the street to your house, through either an overhead pole or underground (depending on if you were already with Openreach previously). Following that, the engineer will create a small hole in your exterior wall to run the fibre cable inside and then connect it to a Fibre Connection box. If you don’t already have one of these, the engineer will install it for you.

How do I cancel my TalkTalk plan?

If you’re switching to another broadband provider within the Openreach network, simply sign up with your new provider and it’ll cancel your TalkTalk contract for you. However, switching to a provider on a different network, such as Virgin Media, means you’ll need to notify TalkTalk about cancelling. It’s best to tell TalkTalk about your plans to cancel with 30 days’ notice.

Alternatively, you can cancel your TalkTalk contract, switching or not, by calling 03451 720088. The TalkTalk team will tell you how to return your equipment – and whether you face early exit fees. If this process is to much of a hastle for you, contact the Broadband Plans team! We can take care of this process free of charge.

Should I switch to TalkTalk?

TalkTalk has a lot to offer at relatively low prices – but you should consider all aspects of the provider beyond its costs.

One of the key benefits of TalkTalk is its wide range of broadband speeds. Whether you’re looking for a basic connection or an impressive, future-proof, gigafast connection, TalkTalk has a broadband solution for you. What’s more, TalkTalk’s TV options are quite varied, allowing customers to bundle sports channels or streaming services with their broadband services.

Keep in mind that TalkTalk’s customer service is rather disappointing. Its TV services also aren’t as extensive as those of its competitors, so you’d find a wider range of live TV channels with the likes of Sky or BT.

Overall, despite a few flaws, TalkTalk’s broadband packages are extensive, and most of all, they’re very affordable.

📞 Do I need a phone line to use TalkTalk broadband?

For TalkTalk’s ADSL broadband options, you will need a phone line installed in order to access the Internet. However, TalkTalk’s fibre services do not require one as they do not operate using phone lines.

📈 Is TalkTalk owned by BT?

TalkTalk is not owned by BT. TalkTalk began as a subsidiary of Carphone Warehouse and later became its own company. However, TalkTalk uses the Openreach network, which was formerly owned by BT.

Although TalkTalk isn’t renowned for the reliability of its broadband, you can expect a largely reliable connection from this provider. Its free broadband routers are basic yet decent, so you shouldn’t expect regular connection issues. However, keep in mind that if your TalkTalk broadband connection fails, TalkTalk’s customer service generally receives poor or mediocre reviews.

💰 Does TalkTalk charge for broadband installation?