If for any reason you cannot get normal ADSL or fibre broadband at your property, then there is another option. Satellite broadband is a great solution for people who live in rural or remote areas where there is no existing broadband infrastructure. Rather than relying on a network of cables, satellite broadband is received through a dish attached generally to the side of the property or at a suitable height to receive a good signal. It works in the same way as satellite TV, although it is also able to send or upload data as well as receiving it. We’ll provide an overview of how satellite broadband works, how it compares to other forms of broadband, and a list of providers to see if satellite is the best option for you.
Last update: April 2022 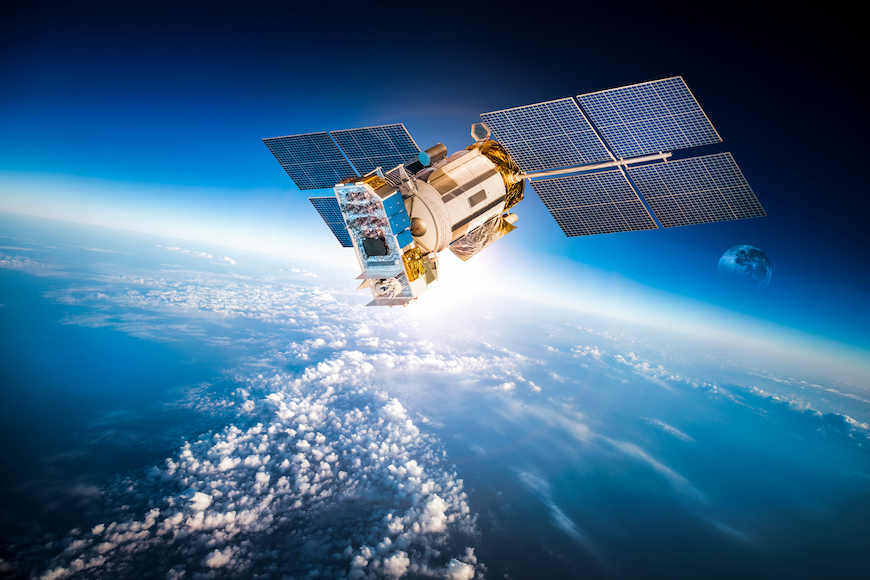 The big advantage of satellite broadband is that it can work almost anywhere in the world. Whether you live in a very remote location or up a mountain, as long as you have a place to mount a dish and power supply you can get the internet on your property. The downside is that satellite broadband is more expensive than standard broadband packages. Prices start low, at just £20 a month but this is for a very limited service. More comprehensive data packages can cost as much as £100 a month. You may also need to pay a fee for installation, as well as equipment rental (buying is an option but also costs money). Speeds vary but are usually somewhere between 2 and 20 Mbps, which is on a par with ADSL connections but slower than fibre.

You may need satellite broadband if you live in a location with no ADSL or fibre link. Rural or remote places are often lacking the infrastructure to bring the internet to your home via a cable that is required for some broadband connections such as cable broadband. Even in remote places with a phone cable, the increased distance can often mean that ADSL signals are very weak and that the internet is very slow. If this is the case, then a satellite broadband connection might be your best option.
There are some drawbacks to satellite internet, such as the increased cost and lag in signal which makes gaming very difficult. But for people with no other alternative it is a great way of getting connected to the web.


How does satellite broadband work?

Satellite broadband does not connect to a local exchange like ADSL and fibre services. Instead, the cable from your house connects to a satellite dish installed on or near your home, located in a suitable spot with an uninterrupted view of the satellite.
The dish sends and receives information to and from the satellite, which transmits to a ground station on earth. This ground station is connected by fibre to the same network of data servers. Once inside your home, the internet will work in exactly the same way as a normal connection.


Is satellite broadband any good?

The answer to this question depends on your situation. If you live in a city where you can get superfast full fibre broadband for £30 a month and speeds up to 300Mbps, then satellite internet is not for you. It will be slow and costly compared to what is available on the market.
However, if you live in a remote or rural area with little or no ADSL or fibre connection then satellite broadband might be a lifesaver. If you have a very slow ADSL connection, or none at all, then a reliable and medium speed connection of around 15Mbps is exactly what you need to stay connected. Yes, it may cost a bit more but it means you can stay in touch from anywhere in the world, well worth an extra few pounds a month.


What is the best Internet for rural areas?

As much as 90% of the UK now has access to fibre broadband, which is an impressive statistic. However, this does mean that more than 10% of homes are without this service and may have to rely on an old ADSL connection or even nothing at all. That could be as many as 2 million homes without a broadband connection.
These are mostly located in rural and remote areas where the cost to benefit ratio of installing fibre cables is more difficult. If this applies to you, then a satellite broadband connection might be your best option.

There are a number of specialist satellite broadband providers in the UK, offering a choice of satellite services. These include:

Does Sky do satellite broadband?

People often mistakenly think that Sky offers satellite broadband because they do satellite TV. However, although Sky has been offering TV to our homes via satellite for decades, and also offers broadband services, it does not offer satellite broadband. All of Sky’s home internet deals use the Openreach BT line network.


Who is the best satellite Internet provider?

There is no one best satellite internet provider. Most companies offering satellite broadband tend to group around the same pricing points. These start at around £20 a month for very limited packages offering just a few Mbs of data. More comprehensive packages with unlimited data are closer to the £100 mark.
Freedomsat and KONNECT are two of the biggest and most popular providers of satellite broadband in the UK. However, a number of smaller suppliers also exist.


Do you need a landline for satellite Internet?

You do not need a landline for satellite internet. Unlike most ADSL and fibre connections that enter your home through the copper wire phone like, satellite comes in through a dish so no phone line is required.

How much does satellite broadband cost?

Costs for satellite broadband vary between around £20 per month up to £100 or more. The actual costs depend on the amount of data you want to use or need. Usage allowances are generally better than the equivalent mobile package. However, they are lower than most fixed line broadband solutions. There are unlimited products available but these tend to be expensive.


Why is satellite Internet so expensive?

Satellites internet utilizes some extremely expensive pieces of equipment, some of which have been launched into space. As a result, bandwidth is more precious which makes the whole business of satellite internet expensive.

The disadvantages are that satellite is more expensive than standard broadband packages and can cost as much as £100 a month. You may also need to pay a fee for installation as well as equipment rental. There is also signal latency which means online gaming can be almost impossible using a satellite service.


How fast is satellite broadband?

Services vary but generally offer speeds between 2Mbps to around 30Mbps. Upload speeds used to be lower at around 128 / 256 Kbps but these have increased with the launch of new satellites, with options for up to 6Mbps upstream speeds now available. So while it may not be as fast as ultrafast broadband, it´s still a great option for those looking for a reliable internet connection.


Is satellite broadband any good for gaming?

Currently satellite internet services do not work very well for gaming. The latency is simply too big, a consequence of the fact that geostationary satellites are located thousands of miles away. These increased ping rates make online gaming very difficult. So before committing to satellite internet, it would be best to discover what internet speeds you require for you online usage.


How does satellite broadband compare to other types of broadband?

Satellite internet speeds are comparable to those you get with ADSL, between 2 and 20Mbps. However, you will pay much more for a satellite service with unlimited downloads and it´s beneficial to compare broadband prices before making the commitment to satellite internet. They cannot compete with the speeds possible with fibre broadband.

Most bad reviews for satellite broadband centre around the fact it has poor latency, or a high ping rate. That means satellite internet is not good if you're a gamer or if you intend to use VoIP services. However, on the whole, satellite broadband is a valuable service for people who otherwise would be without a broadband connection.

Rural or remote places are often lacking the infrastructure to bring the internet. Even in more remote places with a phone cable, ADSL signals can be very weak. If this is the case, then a satellite broadband connection might be the best option.

How much does satellite broadband cost?

Costs for satellite broadband vary between around £30 per month up to £100 or more. The actual costs depend on the amount of data you want to use. Usage allowances are generally better than the equivalent mobile package.

How fast is satellite broadband?

Services vary but generally offer speeds between 2Mbps to around 30Mbps. Upload speeds were lower at around 128 / 256 Kbps but these have increased with the launch of new satellites.

Is satellite broadband any good for gaming?

Satellite internet services do not work very well for gaming. This is because the latency is simply too big, as geostationary satellites are located thousands of miles away.