Choosing The Right Broadband-Only Deal For Your Home

Connecting with your family shouldn't be a luxury.

Connections are what matters the most. We make sure money doesn’t come in the way by switching you to the best broadband plan on the market.
Monday to Friday – 8.30 am to 5.30 pm

Connecting with your family shouldn't be a luxury

Connections are what matters the most. We make sure money doesn’t come in the way by switching you to the best broadband plan on the market.
Monday to Friday – 8.30 am to 5.30 pm

A broadband-only deal can give you a broadband connection without any additional extras driving up your monthly bill. Many Internet Service Providers (ISPs) combine broadband with phone, TV and even gas and electricity to create attractive bundle deals. While these can be great value for some, many would prefer to get a broadband-only deal. The good news is that some ISPs will allow you to get this kind of connection. If you rarely (or never) use your land line and get most of your entertainment from streaming services like Netflix, a broadband-only deal is likely to appeal to you.
Last update: April 2022

Here, we’ll explore the difference between broadband-only deals and broadband with phone line rental. We’ll look at the different types of broadband-only connection and the deals offered by different providers so you can choose the best broadband deal for your home. So you can make an informed decision on behalf of your household. 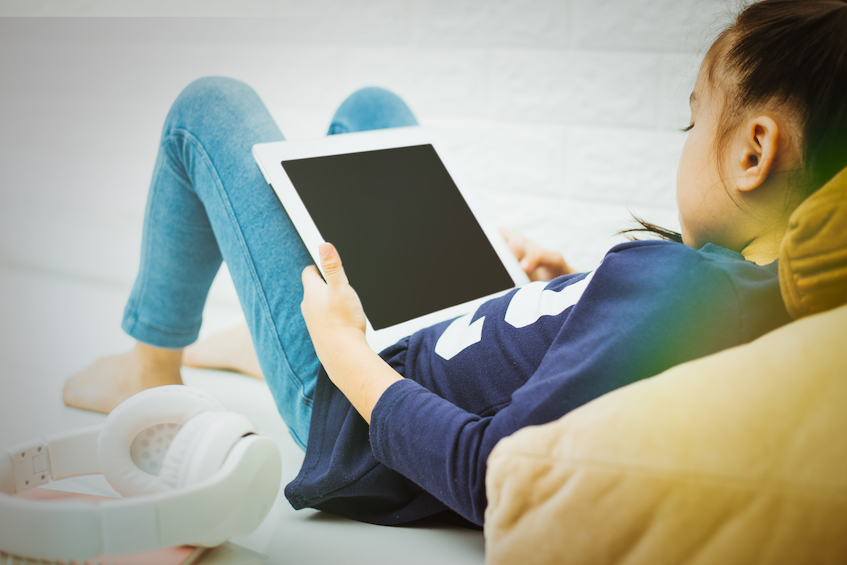 What is a broadband-only deal?

A broadband deal means that you’re only paying for your broadband connection. It doesn’t include other extras like a landline phone package or a TV entertainment package (which are usually bundled in by larger providers like Sky or Virgin Media).
A broadband-only deal doesn’t just mean that you eschew a phone package and digital TV channels. It means that you don’t get a phone line at all. However, it limits the kinds of connection that will allow you to get a broadband-only deal.

Can I get broadband-only?

What are my options for broadband-only packages?

In the table below, you can see which types of broadband connection will permit you to get a broadband-only deal.

If you live in an area where you can only get FTTC broadband or ADSL broadband, you’ll need a phone line whether you want one or not. Coaxial cable broadband uses a combination of copper and fibre broadband to create a fairly fast and stable connection. FTTP or “full-fibre” broadband is likely to be the fastest and most reliable option with speeds of up to 1Gb. However, this is not available all over the country yet.
If you live in a rural area with no cabling infrastructure, your best bet will be a mobile broadband deal that is administered through the networks. These use the same 4G as your smartphone. However, this kind of broadband plan is often subject to data limits. What’s more, not all areas of the country get reliable or consistent coverage, which will invariably impact your connection’s performance.

What are the disadvantages of broadband without land line?

A broadband-only deal saves you from paying for services that you don’t use. But does it have any disadvantages or limitations?
The primary disadvantage is that you won’t have access to a land line phone when you need it. This may not seem like a problem. Until you encounter network issues that render your expensive smartphone practically useless.
You’ll also most likely need to set up a new broadband-only connection. And this could cause disruption and / or result in installation fees. What’s more, you’ll likely be kept on a longer-term contract of 18-24 months. Sure, you can exit this contract early, but you’ll need to pay early exit fees and / or equipment fees that can range from £45 to over £80.
You can get around this if you have mobile broadband, but this is also not without its limitations in terms of speed, data caps and national network coverage.

What should I look for when comparing broadband-only deals?

Broadband-only deals are fast becoming the norm. In fact, Openreach, the network responsible for providing most of the phone and broadband connections in the UK, is committed to migrating all users of the Public Switched Telephone Network (PSTN) to Internet Protocol (IP) by December 2025. This will render copper land lines obsolete and make broadband without a phone line the norm.
While we may not quite be there yet, there are a growing range of broadband-only options to choose from. So many, in fact, that you may find it tricky to keep track of them all. Of course, the team at Broadband Plans will be more than happy to help you find the perfect broadband-only deal for your home. Nonetheless, we want you to make an informed decision.
As such, when choosing a broadband-only deal you should think about…

Of course, the monthly cost of your broadband will need to be factored into your budget. A broadband-only deal may save you the cost of line rental… but that doesn’t always necessarily mean that it’s your cheapest option. Especially if you want a FTTP or “full-fibre” broadband deal that provides better performance.

Switching ISPs regularly can help you to get the best value for money. However, if you want a new FTTP or cable connection, you’ll probably be locked into a longer contract. These typically last 18-24 months. If you want to escape your contract early, you could be subject to some hefty exit fees or equipment charges.
As of February 2020, it’s an ISP’s responsibility to notify customers when their contract is drawing to a close. So they can shop around without worrying about charges.

Speed is an important factor in choosing a broadband-only deal. The good news is that most of the connection-methods for these types of plans are capable of pretty high speeds. Especially if you have FTTP which can achieve speeds of up to 1Gb.

Some ISPs throw in extra goodies like highstreet vouchers, reward cards or cashback. While these may be appealing, bear in mind that nothing is free. You’re paying for these with your subscription fees or by agreeing to a longer contract.

Is it cheaper to get a broadband-only deal?

Usually, yes. However, you may find that some providers actually charge more for broadband without a phone line rental. Virgin Media was a prime offender in this regard before it changed its pricing structure.
You can always rely on Broadband Plans to help you find the cheapest broadband-only deal.

Most ISPs will require you to set up a dedicated phone line, even with a fibre connection. However, there are some that will offer you a broadband-only deal. These include cable providers like Virgin Media and Sky as well as full-fibre broadband providers like Hyperoptic, People’s Fibre and (in some areas) BT.
Mobile providers include:

You can see some of the best value broadband-only deals listed in the table below:

What is the cheapest broadband-only deal?

The cheapest broadband-only deal on the market right now is Hyperoptic’s 50Mb fibre connection. This offers unlimited downloads and a fairly flexible 12 month contract at £22 per month. A £29 setup fee applies.
However, Hyperoptic is not available in all areas across the country.
If you’re looking for a widely-available deal your best bet may be Virgin Media’s Ultrafast 100Mb broadband. This offers speeds of up to 108Mb with no setup fee for just £28 per month. However, this is a slightly longer 18 month contract.
If you’re after a mobile deal, your cheapest bet is Vodafone’s R219 mobile hotspot dongle. This has speeds of up to 150Mb and a flexible month-by-month contract for just £8 per month. However, it has a download limit of 2Gb.

Is it possible to get home internet without getting a land line?

Yes. Although the majority of broadband providers in the UK require you to have a phone line, you’re likely to be able to get a broadband-only deal no matter where in the coin try you live. However, you may need to make sacrifices.
If, for instance, you need a new cabled connection, you may have to resign yourself to a lengthy 18-24 month contract. Alternatively,

Will I save money by getting broadband without a land line?

Possibly. But not always. Remember that the cheapest kinds of connections like copper ADSL and Fibre To The Cabinet require you to install a phone line. So you might find that the cheapest deals actually include line rental.
The Broadband Plans team will be able to find a broadband-only deal that offers the perfect combination of coverage, performance and affordability with no unnecessary extras.

Can I get unlimited fibre broadband without a phone line?

As full-fibre providers expand their reach across the UK, it’s growing increasingly likely that you’ll be able to get a fibre broadband-only deal with unlimited data. And with full-fibre deals starting at just £22, you can still get a great deal while paying below the UK average of £30 per month.
Even if you don’t live in an area where full-fibre is accessible, you may be able to get a mobile broadband-only deal with unlimited data for as little as £28 per month. And as 5G rolls out across the country, mobile deals are only going to get better and cheaper.

As the UK slowly phases out its reliance on copper connections, and mobile usage eclipses land line usage, you’ll find that broadband-only deals are getting more and more readily available. However, if you live in an area where cabling is an issue, you may need to use a mobile network to get a broadband-only deal with no unnecessary phone line.
At Broadband Plans we’ll help you explore all of your options before finding you the perfect broadband-only deal for your household’s performance needs and budget. We’ll even manage your switch for you from end-to-end to bring you better broadband, faster and hassle-free.
Want to know more?
Give us a call today on 0330 818 6395

Can I get broadband without a phone line?

What can you save by paying line rental upfront?

Monthly line rental can add to your broadband costs unless you have a broadband-only deal. However, some suppliers like BT will offer you a discount of one month’s line rental when you pay for the whole year upfront.

Can I get Wi-Fi with a broadband-only deal?

If you have a coaxial or fibre broadband-only deal, you can absolutely use Wifi. You will get a router that is capable of both wireless and wired connections. Keep in mind, however, that you’ll get a far faster and more reliable connection when you use an ethernet cable connection rather than Wi-Fi.

Can you get a broadband-only deal with fibre optic?

Is a broadband-only deal right for me?

That depends on your circumstances. If you exclusively use your mobile phone for work and social calls, and eschew digital TV channels for streaming services like Netflix, Amazon or BBC iPlayer, you may find that a broadband-only deal is better value for your home.

Contact the team at Broadband Plans, and we’ll discuss your available options to help you make a better-informed choice.