Everything You Need to Know About Vodafone Broadband and Phones

Vodafone is one of the most well-known mobile operators in the UK. With 19.5 million customers in the UK alone, the company is considered one of the ‘big four’ giants in the mobile market, alongside EE, O2, and Three. Vodafone actually was the carrier behind the UK’s first mobile phone call in 1985 – just four years after the company was founded. Naturally, Vodafone is synonymous with mobile phone services – but the provider has expanded beyond this. You can now receive home broadband, TV, and landline phone services from Vodafone too, so this telecoms company has plenty to offer! It’s also one of the more affordable providers out there, thanks to its reasonable prices.
Last updated in: August 2022

However, before signing up, it’s important to consider whether Vodafone is right for you. We’ll help you find the best Vodafone broadband, phone, and SIM-only deals so you can save money and make an informed purchase! 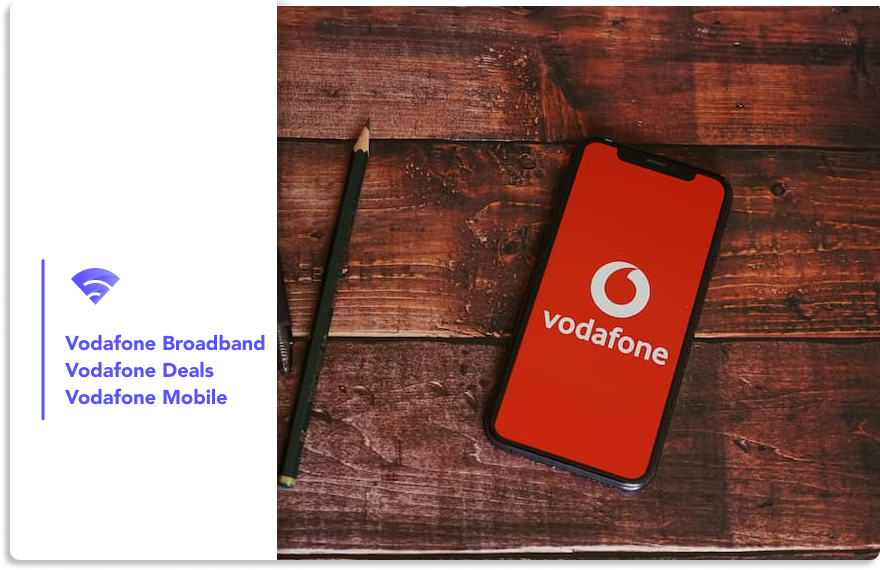 Vodafone has a variety of great mobile options. This includes its monthly Red deals with optional entertainment bundles, and Vodafone pay as you go packages, where you can pay £1 a day to make calls, send texts, and use data (or pay nothing for days when you don’t). Vodafone allows its customers to be flexible with top-ups and bundles, and its 4G and 5G coverage is impressive too.

Vodafone also has a range of broadband offers with fast speeds and low prices. Its Superfast packages operate entirely on fibre ensuring a fast, stable connection. For TV fans, Vodafone TV is only available in a bundle, it encompasses many channels outside of Freeview with additional premium packages that can be upgraded to. The TV Anywhere app also allows users to conveniently access their TV package outside of their household.

The speeds you can expect will vary between deals. There are three different connection types available from Vodafone, with different speeds for each package:

*Vodafone is currently rolling out its ultrafast and gigafast network, which doesn’t cover most properties yet.

Like most providers, Vodafone uses the Openreach network to deliver broadband services. This makes Vodafone superfast broadband widely available, as 93% of the UK population can access it.

However, Vodafone’s ultrafast and gigafast Wi-Fi deals aren’t as widely available. Eight million homes can access these Vodafone full fibre deals through the Openreach and CityFibre networks. The fastest speeds aren’t available everywhere just yet – but you can check local availability on Vodafone’s website.

If you’re looking for a mobile deal, you’ll most likely receive coverage, as Vodafone’s 4G network covers more than 99% of the UK population.

Pros and cons of Vodafone

It’s important to consider both the advantages and disadvantages of choosing Vodafone as your provider:

Vodafone offers a variety of pay monthly and PAYG sims and phone contracts. It also offers several broadband and fibre options, as well as the entirely digital Vodafone TV.

Unfortunately, Vodafone’s broadband deals all include landlines – even those with full fibre connections. You can’t get a broadband-only deal from Vodafone, but as all deals include PAYG calls as standard, you won’t pay extra for your landline if you don’t use it.

Vodafone also offers users the option of bundling their broadband and TV packages. This means that you would be paying one bill to the same provider which can ease some of the bill payment hassles and can be a cheaper option that getting the services separately. Here are the best Vodafone broadband and TV deals: 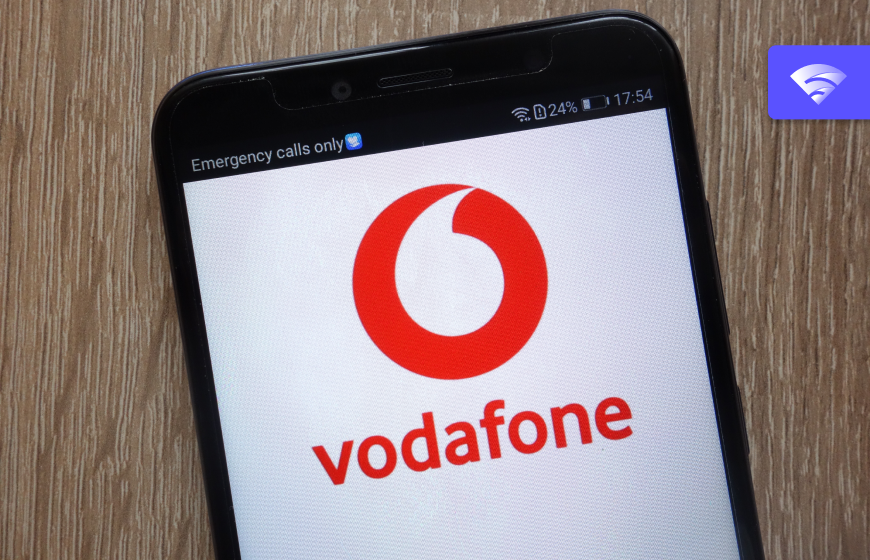 Vodafone is also well known for their mobile services and offer these services as a stand alone or as a bundle. Here are Vodafone’s most popular mobile-only deals.

And here are some of Vodafone´s Mobile phone deals:

If you’re looking to join or leave Vodafone’s broadband or mobile network, you’ll be glad to hear that switching is easy and Broadband-Plans is here to help you make switching even easier if needed.

Should I switch to Vodafone?

There are many reasons to switch to Vodafone:

It’s also important to consider the downsides before switching:

What Vodafone services are available in my area?

Vodafone can deliver broadband to 93% of the UK population. However, if you’re in an area without fibre broadband, you won’t be able to access Vodafone’s Wi-Fi services. Its full fibre services aren’t available everywhere either.

Vodafone’s mobile services cover 99% of the population, so they’re likely available in your area. You can check the availability of all Vodafone services on its website .

How do I switch from Vodafone to another provider?

If you’d like to exit a Vodafone mobile plan, sign up with your new mobile carrier. Then call 191 from your Vodafone phone and request a PAC code if you’d like to keep your number. For a new number, request a STAC code from 191. Once you’ve got your code, give it to your new provider and they’ll transfer you between networks.

How do I cancel my Vodafone contract?

You can cancel your Vodafone phone or broadband via its website or by calling 0333 304 0191 or 191 from a Vodafone number. You’ll need your Vodafone account number and you may be charged an early termination fee for leaving your contract before its end date.

You can call Vodafone customer services on 191 free from a Vodafone mobile phone, or 03333040191 from any other UK phone where standard charges apply.

📶 Why is Vodafone signal so poor?

If you live outside cities especially in smaller towns or villages, Vodafone poor signal can be caused by the location where natural landscape such as trees, mountains, etc create barriers for signal transmission.

🌐 What network does Vodafone use?

Vodafone uses its own Vodafone network instead of piggybacking off their competitors networks.

💨 What is Vodafone internet speed?

Vodafone broadband speeds can go as high as 940 Mbps from Vodafone's coverage area. However, most of their users see average internet speeds between 36 and 71 Mbps.